Master of farce relishes going through the Mill 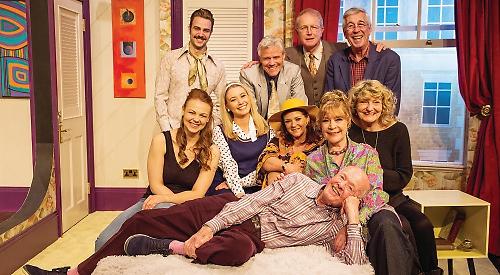 RAY Cooney is thoroughly enjoying himself. Now 85, the master of farce is back at the Mill at Sonning — one of his two favourite theatres — directing a revival of his 1969 play Move Over Mrs Markham.

With a cast of four men and five women, the comedy was co-written with the late John Chapman, who Cooney got to know when he was cast in Chapman’s play Dry Rot at the Whitehall Theatre in 1956.

Dry Rot was one of the now-legendary series of series of farces overseen by actor-manager Brian Rix that played to packed houses at the London venue from the start of the Fifties till the mid-Sixties.

The period is one that Cooney looks back on with immense fondness, not least because the hyper-creative atmosphere fostered by Rix and the collaboration with Chapman — with whom he wrote two other plays — helped him cement his vocation as a writer.

“Well,” he says, “I started off as a 14-year-old boy actor in1946 and I spent the first 20 years of my career acting. Then I sort of segued into writing when I joined Brian Rix at the Whitehall Theatre and did two plays with him.

“By that time I’d done years of weekly rep and then I got these two plays that ran for four years each. And I thought, well, I’d better do something else other than sit around all day, play tennis, chase girls — I wasn’t married then! — and I thought I ought to have a go at writing.

“And of course I hadn’t quite appreciated what I’d soaked up over the years. You know, I’d spent my entire life in the theatre and it stood me in good stead.

“Working with Brian Rix, the first two plays I wrote went on at the Whitehall Theatre and suddenly I was a writer — then I started directing and producing.

“I’ve thrown off the producing hat now and I haven’t written anything for a couple of years, so I tend to just direct now — and act when I get the odd moment.

“As far as I’m concerned you don’t retire in the theatre — you either drop dead or go mad. Not quite sure which way I’m going! But I’ve had a wonderful time. When I think about it I’ve actually done over 70 years now — I’ll be 86 next month, so I’ve done 70-odd years in the business.”

Just how odd in places, Cooney chuckles to recall. Starting with the time the actor playing the lead in one of his plays dropped out at the last minute.

“That’s happened twice,” he says. “It happened once at Guildford when we tried out Run for Your Wife there and the leading actor got so nervous he disappeared before the final dress rehearsal — so I had to take over with 24 hours’ notice. People think that because you’ve written them you must know them word for word, but you don’t. You know the whole thing generally and you are aware of all the words, but you haven’t learned them in a row! So to learn them in 24 hours ... but luckily, you know, with experience over the years, that was okay.

“And then it happened at Sonning as well! And on the same day — the day of the final dress rehearsal — the lead actor got nerves.

“I was waiting in the rehearsal room and I — I can’t think who it was now but he turned up in his car. I watched him get out of the car and I thought ‘Good, he’s at rehearsal.’ And I saw him hesitate, get back into his car and drive off...

“I said, ‘Oh, he must have forgotten his script or something,’ but he’d driven up to the Midlands or somewhere and wasn’t going to do the play!” He chuckles again.

So the actor in question just ducked out? “Yeah, got nervous. I mean, because they so have to be choreographed, these plays, they are very difficult pieces because they’re on the go all the time and they, you know, some actors just get scared. Luckily, I can’t see — I hope it’s not famous last words but I can’t see it happening with this company because they’re a really talented, experienced bunch.”

First staged in 1983, Run for Your Wife went on to become Cooney’s greatest success as a playwright, enjoying a nine-year run in the West End — including 14 months at the Whitehall Theatre.

What not everyone sitting in the stalls might appreciate is just how much work goes into the making of such a hit beforehand.

“What I always do is we have a rehearsed reading of it when it’s brand new, do a rewrite and then we try it out at Windsor or Guildford or somewhere like that.

“Then after that I’ll do another rewrite, and then I always play in them because then I get the feeling of the response from the audience.

“It’s the rewriting and the polishing that’s so important, and it’s encouraging for the West End company — if it goes into the West End, as they usually do with me, luckily. They know the work that’s gone into it and so, you know, they’re respectful of the play. So then after that, after they’ve been done in the West End, I just love coming to Sonning with them.

“Over the years here [the Mill] and the [Menier] Chocolate Factory I think are my two favourite theatres. They’re run so well, intimately, and they don’t have any kind of government support — they run themselves and I just admire them so much.”

• Move Over Mrs Markham is playing at the Mill at Sonning until Saturday, June 2. Evening shows run from Tuesday to Saturday with Saturday matinées taking place every week and Sunday matinées booking for April 29, May 13 and May 20. For tickets and times, call the box office on 0118 969 8000 or visit www.millatsonning.com