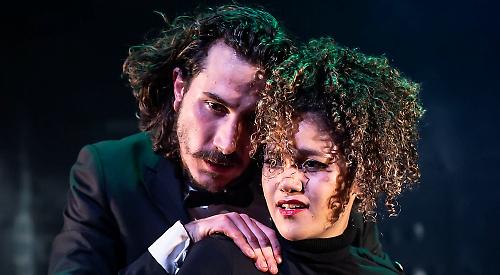 PAUL HART, the artistic director of the Watermill at Bagnor and director of its new production of Macbeth has gathered an enormously impressive team of professionals at the top of their game for its latest telling of a Shakespeare classic.

While no review should be a list of names, designer Katie Lias, musical director Maimuna Memon, lighting designer Tom White, movement director Tom Jackson Greaves, video designer Louise Rhoades-Brown and assistant director Robert Kirby have all combined their considerable talents to achieve a production that is quite new and unique in its accessibility and use of music to accentuate emotions and create tension.

The Watermill has a huge advantage in that it seems to have an endless supply of amazingly talented actor-musicians at its disposal, and this cast — headed up by Billy Postlethwaite in the title role and Emma McDonald as Lady Macbeth — more than rose to the challenge.

This certainly wasn’t “Macbeth the Musical” yet the instrumental and vocal support to Shakespeare’s lyrical prose made an invaluable contribution to the success of the show as a whole.

Something that was never better illustrated than during the king’s death scene, which was given a spine-chillingly sinister violence by the imposition of light, rhythmic and catchy music over it. This is a gripping, energetic and entertaining production, with Shakespeare’s language made more accessible through the use of the music.

Although, contrary to what would have happened in Shakespeare’s day, when we would have been strolling about talking to our friends and buying oranges, the first half does turn out to be a very long sit.

There have been productions of Macbeth when you actually felt frightened of the main protagonists. In this production there are neither performances nor direction that induce that sort of emotion, but it rather accentuates the timelessness of the destructive power that ruthless ambition, intrigue and violence has over those who allow themselves to fall prey to it, making the telling of the story as relevant to today’s audiences as it was to Shakespeare’s.

It has been said of Macbeth and Lady Macbeth that their deaths were not a tragedy but their lives were, and this superbly staged production at the Watermill will leave you in no doubt of that.