Panto villain prefers a red dog to a white cat 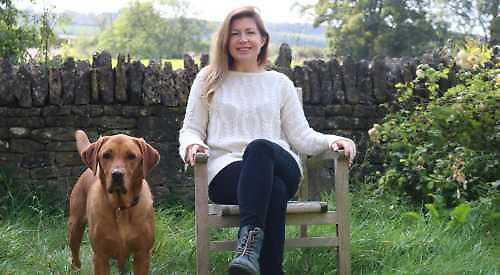 THE Kenton Theatre’s original pantomime baddie is getting ready to rejoin the fray this Christmas — and she can’t wait.

Back in 2012, confronted with the traditional audience boos and jeers, Mary Stewart gave as good as she got when she played Cinderella’s wicked stepmother.

Now she is preparing to take on the role of the sorceress Maleficent in Sleeping Beauty — which is playing for 24 performances between December 13 and 28.

With a total of 5,760 seats on sale, the show — produced by Kenton Theatre Presentations in association with Bear in the Air Productions — is the biggest of the year for the New Street venue.

Originally from Point Lookout, New York, Mary is a classically trained actress who, together with her husband Daniel — the son of Star Trek and X-Men star Patrick Stewart — has been based in the UK for the past seven years.

The couple, who have two children aged 16 and 12, now live near Chipping Norton.

But at the time Mary was cast in Cinderella in 2012 it was both her first acting job in the UK — and her first experience of panto.

Potentially something of a culture shock, Mary seems to have taken the role in her stride.

“It was such a hilarious script,” she says now. “I played the wicked stepmother and I played her with a horrible, horrible New York accent.

“I’d never done a panto before but I’d done loads and loads of standard musicals, so I’d done singing and dancing.

For British audiences, it’s perhaps easy to forget that our panto tradition hasn’t spread to the other side of the pond.

“We’ve got nothing like it,” says Mary. “The most Christmassy tradition we ever did as a family going to the theatre was going to The Nutcracker.

“When I came here I literally had no idea, but with the first experience of doing Cinderella I had two young men playing the two ugly stepsisters.

“They were absolutely fantastic dancers, which was great because I was able to do a bunch of dance numbers with them.

“We don’t have any men as women in this production of Sleeping Beauty because there’s no dame. Instead there’s the female baddie, because I’m playing Maleficent. But there is the boy — so there’s a beautiful young actress who’s playing the prince.”

With the recent stage and screen success of Phoebe Waller-Bridge’s Fleabag, there has been much discussion of the dramatic art of “breaking the fourth wall”.

But as Mary rightly points out, there is no fourth wall when it comes to shows like Sleeping Beauty.

“With panto, if you didn’t directly address the audience they would be disappointed,” she laughs. “It just wouldn’t work.”

Recalling her stint as the wicked stepmother, she says: “I found it very liberating because I consider myself a comedian — I love to make people laugh, it’s one of my favourite things in the world.

“And so to be able to directly address the audience, to look right at the audience and talk to them and sort of banter with them, I found that so much fun.

“Like doing a musical — or like doing Shakespeare, really — you have to have enormous ‘side’ to play the panto baddie. You have to be totally confident and you can’t back off it.

“And actually when my family came to see it, my little son had never seen me on stage before — he was only five at the time — and he loved it, he absolutely loved it. And my daughter, who was 10.

“They were absolutely squealing with delight and booing me — it was so much fun for them. It was like a completely child-friendly experience that they could see their mom up there being the bad guy.

“And my husband, you know, he’s been in the West End and at the RSC and on Broadway, he was like, ‘That’s my favourite thing that you’ve ever done.’”

It’s a timely reminder that when it comes to panto, the villain is often the star of the show.

“And I really feel that,” says Mary. “Not in a bad way, but I feel that responsibility. I know that the audience is following me in terms of the storytelling, even more than they’re following the good person.

“Because usually the hero or the heroine doesn’t have the opportunity to explain their motivations to the audience — but the bad guy always does.

As Mary makes clear, playing the “panto baddie” is something more than a regular acting role.

“Sometimes with panto you have to speak to the audience in the moment,” she says. “Because I expect to be heckled and booed and I can’t just accept the boos — I have to talk back.

“It’s expected that the baddie wouldn’t just accept the dislike, that she would either boo back, insult, question them — whatever you want to do, however you want to go with the character.

“It’s much more fun if the baddie is in a constant dialogue with the audience, whether she’s trying to convince them that she isn’t bad or whether she gleefully embraces being bad.”

As far as projecting that image is concerned, Mary was delighted by the publicity pictures for Sleeping Beauty produced earlier this year.

“What’s fun about that is that in the Maleficent pictures with the horns, I look absolutely vicious,” she laughs. “It’s wonderful.”

Which somewhat begs the question, does Mary have a white cat at home in Chipping Norton that she likes to stroke, Bond villain-style?

Slightly disappointingly for Mary’s image as a mistress of evil, it turns out she is the proud owner of red fox Labrador called Finn, aged two and a half.

“He’s fantastic,” says Mary. “He’s very popular on my Twitter account as well because he’s very mysterious and he’s sort of my straight man. He’s very good, he listens to all of my jokes and he’s very patient with me. He’s a very funny dog.

“We never had a dog when we lived in New York City because we had this tiny little apartment — I mean, it was big enough to live in — but we now live up near Chipping Norton and we finally had time to get a dog. My children had been begging for a dog for ages, so now we have one and he’s pretty hilarious.

“Nobody in my family knew anything about how to raise him because we’d never had one, but my husband had always had dogs growing up, so he trained him. And he’s very, very well behaved.”

While Finn doesn’t — as yet — have a part in Sleeping Beauty, it turns out that there is a bit of family history in this area.

“I do wish Finn could be in the panto with me,” admits Mary. “You know, there’s a Shakespeare play that you need a dog to do — it’s The Two Gentlemen of Verona and you have to have a dog.

“When my father-in-law Patrick did The Two Gentlemen of Verona at the RSC back in the Seventies, he played the character, Launce, who owns the dog.

“The dog is very naughty — and that’s where a lot of the comedy comes from. The dog doesn’t do anything that Launce tells him to do. And then he misbehaves and Launce gets frustrated.

“The name of the dog is ‘Crab’ in the play, and so they kept him and they just called him that.”

• Ticket prices for Sleeping Beauty vary by performance. For more information — including a full list of show times and dates, visit www.kentontheatre.co.uk or call the box office on (01491) 575698.