I’ve been into magic since school, says BGT finalist 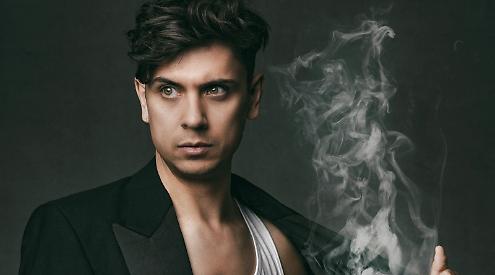 IN an age of digital entertainment, viral memes and quick answers, one performer is determined to preserve the ancient craft of theatrical magic.

Ben Hart is a big believer in illusion and fantasy and wants to ensure the audiences at his shows receive an entertaining and immersive night out.

Magic fans can find out for themselves when he performs at the Kenton Theatre in Henley later this month.

As a finalist on Britain’s Got Talent in 2019, Ben won over the judges, including David Walliams, who described him as “the living embodiment of magic”.

He wowed the TV audience with his incredible sleight of hand.

Ben, 31, has loved magic since he was a young boy.

He says: “I was interested in magic even in my first days in primary school. Obviously, a four-year-old kid’s not going to be able to do good magic but I was very interested in the fantasy of it all.

“By the time I was about 10 or 11, I was putting together an act for taking to junior magic competitions, so it has just been with me all my life.”

Ben was still only 16 when he won the Magic Circle’s young magician of the year competition in 2007, which in turn opened doors.

He says: “They gave me a place upon turning 18. I was just let in instantly without needing to do the normal process,which is normally an audition and an interview and various other hoops that you jump through, and I’ve been a member since.”

Ben is now a member of the Inner Magic Circle with Gold Star.

However, the life of a travelling magician is not an easy one.

Ben, who is from Winchester, lives almost entirely on the road in his transit van, but has an office in Manchester where he keeps his props.

“If I can, I will always try to go to a local museum or see the cathedral, or some cultural thing, which means I can actually put cities to names. Usually, I go in the back of the theatre, then back into the van, see the inside of a hotel and then it’s off to the next place.

“It’s repetitive but the driving is part of the joy of doing the show as well as meeting people.

“You learn very strong communication skills on stage by doing so many different cities.

“I have been an audience member myself who has thought, ‘Oh, God, don’t choose me’, so I try to have an understanding and reassuring edge to my audience participation bits.”

“Yeah, those things are a nightmare,” he laughs. “I often make choices that are based on the display of the control of things that are usually uncontrollable — fire, smoke, water.

“But I suppose what defines my work is that it’s a nightmare to do.”

Needless to say, he pays meticulous attention to detail.

“I’m on my toes as much as the audience,” says Ben. “My show begins many hours before the audience arrives.

“I start my working day at 2pm when I prepare the show and make it just in time for the 7.30pm show. And I don’t finish until everything has been cleared up and packed away. I have a team around me that helps but if it’s anything I touch I want to be the person that prepares it.”

Sadly, the number of magicians is, errr, disappearing.

“There are not many of us on the circuit,” says Ben.

“I think if you were a young performer getting interested in magic now then you would focus on social media, Instagram and TikTok.”

But what digital shows cannot capture, he says, is the sheer atmosphere in a room, with live effects right in front of your eyes.

Ben says: “If I do my job right, within the first three to four minutes of the show, the audience should be descending into a fantasy world. I often tell people, ‘If you haven’t been to a magic show before, go to one because it reminds us to see fantasy where we don’t.

“We go through our lives not seeing magic everywhere and magic reminds us to get big dreams.

“By the end of the night, every night, I feel that I’ve gone on a journey with the audience, that it has been a powerful experience for them and intoxicating for me.”