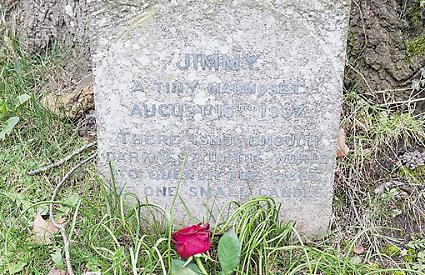 FOUR years ago, I featured a bouquet of flowers placed in front of the peculiar marmoset’s gravestone on Fair Mile but I never found out who was responsible for it.

Now I notice that someone has left a long-stemmed red rose there.

The story goes that this marmoset kept company around the neck of a former nursing sister from the First World War, an eccentric Miss Jekyll, in the manner of an old fur stole. She lived in New Street and apparently was always dressed in black. She was said to have been a regular customer at George Bushell’s photographic shop in Hart Street.

The grave itself is next to the ditch and between the old brick and flint wall that borders some of the deer park and the main road. A red oak tree is slowly pushing the stone over and the inscription is only just legible. It reads: “Jimmy — a tiny marmoset August 16, 1937. There isn’t enough darkness in the world to quench the light of one small candle.”