Top-flight musicians are in concert this summer 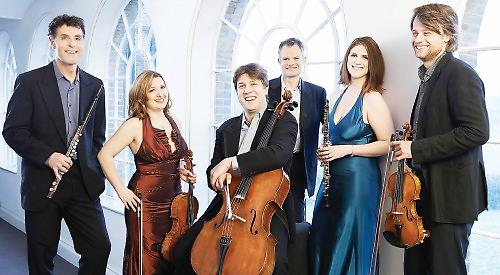 A NIGHT at the opera at Henley’s Kenton Theatre and a series of chamber music concerts at the parish church of St Mary the
Virgin in Hambleden are among the highlights of this summer’s classical music calendar. TREVOR HOWELL takes a look ahead

Chamber music is alive and well in the area’s regular performance venues — especially Norden Farm Centre for the Arts in Maidenhead, which is home to myriad small-scale performances and is just 20 minutes’ drive from Henley.

Their imaginative programming has won many accolades, with Gramophone magazine hailing their “panache, wit and discreet sensitivity in performances... a constant joy.”

Their programme comprises mainly chamber works by Bach, Beethoven and Mozart, plus Villa-Lobos’s Bachiana Brasileiras No 6 and Ginestera’s Duo for Flute & Oboe.

Guitarra Romantica, performed by guitarist Robert Drury, takes place at Macdevitts, South Street, Reading, on Saturday, June 3, at 7.30pm. He will perform several classics, including Cavatina from the The Deer Hunter, Recuerdos de la Alhambra, Romanza, an arrangement of Rodrigo’s Concierto de Aranjuez and other works from Europe and South America.

Helped by his engaging style, he adds interest to the music with amusing anecdotes and background information about the pieces.

At Norden Farm on Thursday, June 15, at 7.30pm, in a concert presented by Maidenhead Music Society, Martin James Bartlett returns to Maidenhead for the third time to perform his latest programme (the details of which will be confirmed nearer the time).

Since bowling the nation over when he won the BBC Young Musician competition in 2014, he has debuted at the Proms, performed a private concert for the First Lady of China and played at the Queen’s 90th Birthday thanksgiving service. To book, call Norden Farm’s box office on 01628 788997.

On Thursday, June 29, at 8pm, in the Courtyard Theatre at Norden Farm, there will be an attractive concert by The London Mozart Trio — Krzysztof Smietana (violin), Lionel Handy (cello) and Colin Stone (piano).

They have gained a reputation as a leading chamber music ensemble through recordings, Radio 3 broadcasts and recitals at major concert halls in London and mainland Europe.

A month later, on Thursday, July 20, at 8pm, Norden Farm welcomes back international piano virtuoso Joanna MacGregor to launch the venue’s summer series of recitals. Her epic programme opens with one of Schubert’s exquisite impromptus and ends with his last and greatest sonata. In between is one of Liszt’s most celebrated transcriptions.

Concerts in Caversham at St Andrew’s Church, which was established by Timothy Watts (oboist with the Royal Philharmonic Orchestra) and Adrienne Black (pianist/ harpsichordist) to promote top-quality professional concerts, ends the season on Saturday, June 17, at 7.30pm with The Trout Quintet and Dvorak’s Dumke Trio.

HIDDEN away in Hambleden village you’ll discover Hambleden Concerts 2017 held at the parish church of St Mary the Virgin, all starting at 7.30pm, writes Trevor Howell.

They open on Saturday, May 13, with the Galliard Ensemble in a programme of Mozart’s C minor Quintet and pieces by Ibert, Hindemith, Grainger and Patterson.

A month later on Saturday, June 10, is the Windsor Box and Fir Company, a group formed in 1994. Their programme, “Under the Greenwood Tree”, comprises 18th century English music played on period instruments.

And on Saturday, July 22, the Astaria String Quartet with Neil Aston (clarinet) perform Mozart’s Clarinet Quintet and works by Schubert, Crusell and Kodaly. Astaria is a highly sought after, successful group of musicians, all of whom are accomplished musicians in their own right.

Apart from Garsington Opera’s semi-permanent structure at the Wormsley Estate, there is limited opportunity for large-scale opera productions in the area. This is largely compensated for by the activities of small, itinerant opera troupes and others.

One example is Opera Prelude, which has three upcoming events. Their locations are kept under wraps until nearer the time, with the address and directions to the venue — usually somewhere in Fawley — being provided on booking.

Next up is “It Takes Two — an Evening Recital of Duets” on Friday, May 19, from 7pm to 9pm, featuring the talents of Callie Gaston (soprano), Amy Lyddon (mezzo), Ed Ballard (baritone) and Laurie O’Brien (piano).

Finally, on Friday, June 9, from noon to 2pm, there will be “ Scenes of Summer: Lily, Lily, Rose” with Sophie Pullen (soprano), Opera Prelude’s young singers and Natalie Burch (piano).

This is an end-of-term talk and recital with smoked salmon sandwiches and wine.

This talk and recital of French music is inspired by scenes of summer and Sargent’s famous oil painting Carnation, Lily, Lily, Rose.

On Saturday, May 20, at the Kenton Theatre in New Street, Henley, “A Night in Vienna” is a double bill pairing some of Mozart’s best-known arias and duets with an opera that charts his rivalry with composer Salieri. The opera is performed by Time Zone Theatre, who have won rave reviews of performances elsewhere.

The opera, Mozart & Salieri by Rimsky-Korsakov, is a close-up of Salieri’s tormented mind, torn between admiration and jealousy, and follows the apocryphal legend that he poisoned Mozart.

Just 20 minutes from Henley near Burchetts Green, Stubbings Opera is set to celebrate its 21st birthday with two nights of opera. The first of these, on Friday, July 21, is Mozart’s The Marriage of Figaro, in which Beaumarchais continues the plot of The Barber of Seville. This is followed on Saturday, July 22, by Puccini’s La Bohème, one of opera’s most popular and unforgettable tragedies. To book, visit www.stubbingsnursery.co.uk/
events/stubbings-opera

Finally, this summer, from June 1, to July 30, Garsington Opera presents four productions plus a community opera at its home on Getty’s Wormsley Estate.

This season marks the arrival of The Philharmonia Orchestra for one opera production in each of the next five years.

Ticket holders are encouraged to arrive early to enjoy the delights of the Wormsley Estate — a trip by vintage bus to the 18th century walled garden, traditional afternoon tea overlooking the cricket pitch, drinks from the champagne bar, or a stroll around the opera garden.

For more information or to book, call 01865 361636 or visit the festival website at www.garsingtonopera.org