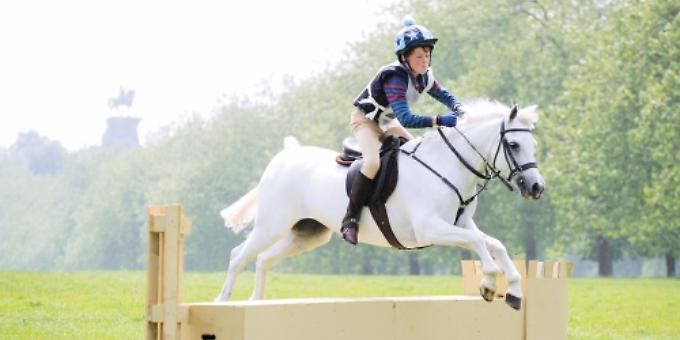 A FUN sponsored ride around Windsor Great Park will be held on Saturday, May 26.

Now in its third year, the event — which takes place by kind permission of Her Majesty the Queen — is again being organised by Stable Talk correspondent Amanda Stewart.

Amanda said: “The Royal Windsor Fun Ride is a prolific fundraiser for charity and provides an opportunity for riders far and wide to jump 40 fences while negotiating the eight-mile course, ride through the water and tackle the infamous ‘Castle’ jump with historic Windsor Castle as the wonderful backdrop.

“Last year riders travelled from as far afield as Essex, Cambridge and Portsmouth to attend the event, with one family using the ride as an opportunity to meet up, ride and enjoy a picnic together.

“Not only that, but riders were treated to seeing some of the Games of Thrones stunt rider team — the very daring Devil’s Horsemen — as they joined in the fun!”

As in previous years, the Berks and Bucks Draghounds had been due to build the course and supervise the 2018 event.

But a clash of fixtures has instead seen the Staff College and Royal Military Academy Sandhurst Draghunt ride to the rescue.

Amanda said: “Sandhurst have kindly offered to course-build this year. The Berks and Bucks hold their annual point-to-point the same weekend as the Windsor ride and were struggling to find stewards to cover both events.

“However, after I attended the SC&RMA Sandhurst Draghunt ball at the Elvetham Hotel earlier this month, I was offered course-building and stewarding help by the Sandhurst masters.

“A few meetings later and it was confirmed that the Sandhurst draghounds would work in conjunction with my already established team.

“Trusty photographer Wayne Jones and his team will as usual be on hand to capture that unique photo opportunity.”

Charities that have benefited from the event in previous years include Help for Heroes and the Thames Valley Air Ambulance.

A spokesman for the Sandhurst draghunt said: “The ride will be approximately eight miles long and will include a variety of well built optional jumps, all of which can be easily ridden round.”