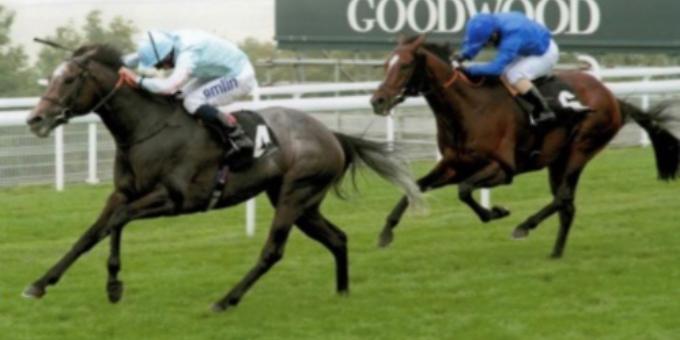 YVONNE Jacques, who has lived in Hambleden for more than 30 years, is celebrating a huge success with her 10-year-old former racehorse Grandeur.

Bought in Ireland in 2010 in a Goffs Orby sale, Yvonne recalls: “I fell in love with his walk, his beautiful head and excellent conformation.”

She decided to give him a strong name and he has lived up to it in every way.

Grandeur was “retired” from racing after four years in training at Newmarket with Jeremy Noseda, but he was successful from the start.

He has won the Twilight Derby at the Breeders Cup in California, as well as the Hollywood Turf Cup (a Grade II race).

He raced at Belmont in New York, Chicago in The Arlington Million, and in the Hong Kong Cup, where the horse has to be invited and entry is reserved for the best one mile, two furlong flat horses in the whole world of flat racing. Grandeur won many times in the UK as well, and one of his favourite racecourses was Goodwood. He has been a truly special horse on the racetrack as he had a great “turn of foot”. He has loved fast turf but he also won the All Weather Championship race at Lingfield. He has won a lot of prize money and has given owner Yvonne so much fun competing on the top racetracks of the world. After his racing career had finished, he enjoyed a few months’ retirement break at The National Stud and Yvonne then decided he deserved a second career and chose female show rider Jo Bates, whom Yvonne says “is a truly talented rider and arguably one of the best in the top-level showing world — so the best needs the best.” Grandeur, already no stranger to success, has now achieved as high as it goes in a completely separate career. “Transforming from thoroughbred racehorse to showing is simply amazing,” says Yvonne.

“Yes, he is beautiful, highly intelligent, a fabulous mover, but this new raw talent has now been patiently developed into a top show horse by much hard work by Jo Bates.

“Of course, to be the supreme champion retired racehorse is fantastic, but to achieve second in the large hacks at the Horse of the Year Show held at Birmingham’s NEC earlier this month is to my mind more impressive, even after he won at Royal Windsor and other top shows.”

Yvonne, herself no stranger to success after running pet insurance firm Pet Healthcare Services Ltd, has only recently moved to her stud in Wiltshire, Carisbrooke Stud, where she now has more than 20 brood mares and their progeny.

She adds: “After his brilliant showing career, I will retire Grandeur to my stud where he can take up ‘nanny’ duties looking after some of the babies. He is a very special horse and I love him dearly.”