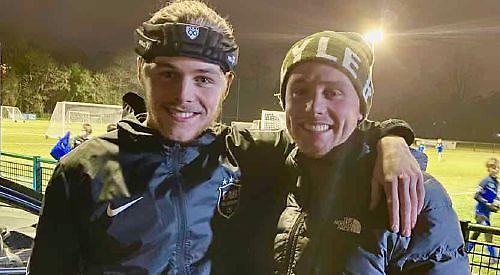 A TEENAGER from Henley who suffered life-changing injuries in a car crash is playing football again and hopes to represent England.

Harvey Greenaway, 19, was left in a coma following the accident in Ewelme in May 2018.

He needed emergency surgery at the John Radcliffe Hospital in Oxford and his parents, Trevor and Dawn, were told he had only a five per cent chance of survival.

Harvey, a promising footballer, remained in hospital for seven months re-learning how to walk, talk, run, swallow and feed himself with the help of the Oxford Centre for Enablement, a neuro-rehabilitation centre.

Since then he has continued to make progress and is now playing again at the Bisham Abbey football academy and is part of Chelsea’s pan-disability programme with dreams of becoming part of England’s cerebral palsy team.

Harvey, who was 16 at the time of the crash, had been a member of the Reading FC academy programme since he was eight and had dreamed of playing football professionally in either the UK or America.

His father said: “Harvey continues to do well. He’s still what they call ‘neurologically fatigued’, which means he gets extremely tired.

“His dream is to play for England’s cerebral palsy team. They keep in touch with us and when he’s at a point where he’s well enough they will come and have a look at him. If that happens these lads go all over the world playing for England in the same way as the regular team.

“Harvey’s able to go now a number of mornings a week to the academy at Bisham Abbey.”

Over the last two years Harvey has raised a total of £24,000 through his JustGiving page for the hospital’s neurosciences ward, which saved his life, and neuro-rehabilitation centre.

The hospital may use some of its share for physiotherapy equipment while the centre, where Harvey had physiotherapy, speech therapy and occupational therapy sessions, will use some of its money to create a room for young adults that he helped to design. It will feature a table tennis table for disabled users as well as an Xbox.

Mr Greenaway said: “When he first came out of hospital we chatted with him about what he could do for the doctors and nurses. He wanted to raise money for the centre and hospital and started his fundraising page. A lot of people who have donated over that time, we don’t even know.

“I’m amazed by the kindness of people. People have been very moved by the story and continue to be so involved in his rehabilitation.

“As parents, we’re indebted to our NHS. As everybody has seen last year, it’s incredible and to be able to help is a small payback for what they have done for our son.”

Meanwhile, a businessman who works with Mr Greenaway has donated 15 new televisions for the patient rooms at the neuro-rehabilitation centre.

The 42in TVs were delivered on Christmas Eve as a gift from Majdi Daher, chief executive of IT firm Denali Advanced Integration.

Mr Greenaway is a consultant for the company and Mr Daher visited his son at the centre and was so moved that he launched the annual Denali Resilience Award. Harvey was the first recipient in 2019.

Mr Greenaway said: “These people are in there for so long. In most of these rooms now the patients have a top-of-the range TV so it’s going to make the experience better for them.”

He stressed that Harvey’s rehabilitation was continuing.

“He has still got a long way to go and he’s still not in education,” said Mr Greenaway. “He continues to work extremely hard every day to be the best he can be. Dawn and I, and his brothers, are totally behind him on that. He’s extremely positive and focused on his rehabilitation.

“It defies what we were all told and I think that is largely down to the amazing professionals for whom he has been donating all this money and also his own inner strength.”