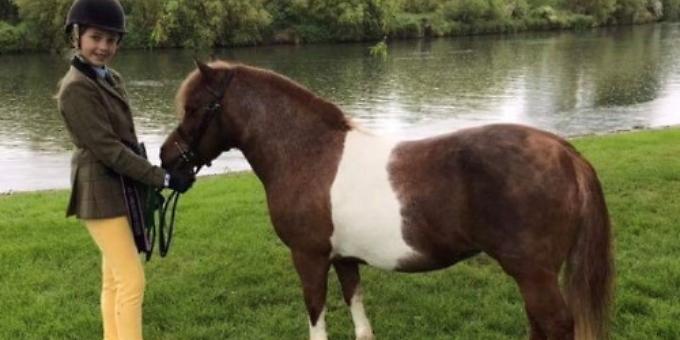 Their mother Carmen Streams and I often used to share transport while competing on the circuit ourselves, albeit 15 to 20 years ago.

The early morning starts often saw us leaving home between 2am and 5am, loading horses in the early morning dewy mist and arriving at far-flung venues long before many locals had even enjoyed their first cup of tea.

Some of the long journeys can prove too much for the young, as Carmen found out after taking her youngest, Fernanda, who was four last year, to the Royal Yorkshire Show.

Having been too excited to sleep on the long journey, Fernanda promptly nodded off in the class line-up waiting to be judged.

Carmen said: “It was a lead-rein class and the waiting to be judged can take a long time — and I guess the whole ‘standing around’ part was just a bit too slow for Fernanda. She wasn’t just in a light sleep, she was snoring really loudly and I really had to leave the ring, much to the amusement of the judges who could hear her!”

So, as most little girls can surely testify, the Royal Windsor Horse Show is a big deal and not one to fall asleep at.

Carmen, who lives on the outskirts of Woodcote, and her parents hatched a good plan. She and Fernanda’s older sister Gavina, 11, would leave early for their class and grandmother Christine would arrive later with Fernanda. However, as anyone who attended the Royal Windsor event can attest, it rained almost constantly for the first three days and lorries, due to the thick mud, were being both towed in and out by trusty farm tractors.

Then, just as Carmen came off the M4, her lorry’s windscreen wipers chose the perfect moment to pack up!

Not to be beaten by the odd setback or rain, a short while later Gavina arrived into a full class of 24 horses and riders, all gleaming and beautifully turned out, performing perhaps in front of Her Majesty the Queen and all desiring that prized rosette. The show was on.

Their luck had seemingly changed. Striding back to their lorry, huge smiles, windscreen wiper repaired, Fernanda had arrived and it was her turn next. Even the sun was showing a slight glimmer.

Lara had the mud washed off, was given a quick haynet and then back under the infamous bridge next to the Thames and once more into the public surrounding arena.

Again a very full class of 24 ponies, all looking like potential winners. Fernanda was definitely not going to fall asleep this time and she rode her heart out.

It was all worth it and she was rewarded with a hugely respectable fifth place — made all the more special as Fernanda had not long recovered from breaking her leg.

Carmen and the whole family were understandably elated with the superb results and the family are aiming for the golden final show of the season, Olympia.

Gavina has already ridden successfully at this show, where she was reserve champion in 2017.